How Does A Float Switch Work

If you are searching for “how does a float switch work“, this article will be your guide!

Older float switches worked by opening and closing circuits as water levels fluctuate. Generally, these float switches were resting in closed positions. This meant the circuit was incomplete and no electric current would pass through the wires.

As soon as the water levels would drop below a predetermined point, the circuit would complete itself. Then, electricity was sent through the circuit, triggering an alarm.

There are two common types of new float switches, including:

Both single and multi point switches will allow you to have more control of your storage tank-filling mechanisms.

Single point float switches operate with three sensors, start, stop and reference, that work to turn the water pump on and off, automatically. This will consistently keep the water at the same level.

To stop the water level, the sensor probes downward into the water to detect levels at various heights. If the water level is determined to be too low, the low water alarm is then trigger. If the level is too high, the high alarm is set off.

What Are Float Valves? 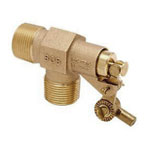 Instead of sensor rods for water level control, many cooling tower operators tend to use float valves. These valves will use a floating mechanism and arm to gauge water levels. They are also used to turn pumps on and off.

Older float switches that were commonly used could only perform one or two operations. Nowadays, float valves are programmed to handle numerous actions.